We’re always excited to share the good times we have hanging out at Wolfgang’s Vault. And so far in 2011, things have only gotten better with their new Android app and a recently unveiled Concert Video catalog.

Last month, WGV debuted the Android version of their award-winning iPhone app. I had been waiting awhile for it and I have to say that it rocks in many ways. For starters, it’s an excellent mobile version of the WGV website experience putting the usual fine selection of featured concerts, Vault Radio, current playlists including Daytrotter sessions and sampler tracks and much more all at your fingertips.

The mobile interface is well designed making it super easy to navigate the content. And the mobile app has just enough of the regular WGV experience to make the connection between the two seamless. You explore the depths of the Concert Vault, save your favorite concerts, and also easily share them with on Facebook and Twitter.

One of my favorite parts is being able to read about the concert while you’re listening to it by selecting the info tab in the top right corner of concert main image.

I love that function the most because I’ve learned more about a band and the concert’s context as the show unfolds, which always makes the show and the band’s history more meaningful and significant.

I’m a huge fan of the past and one of WGV strengths is the writers who do a solid job of providing info about the concerts in these compact and easy to read info areas. Plus, you can click on links in the info tabs and go to even more info about the band. The fun just keeps on going!

Again, it’s exciting exploring how mobile is changing the live music experience and it’s awesome to finally have the WGV Android app version, and I hope you enjoy it too! 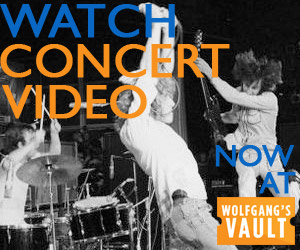 Last week Wolfgang’s Vault unveiled their new offering of concert videos. This is great news because we’ve been looking for more ways to explore the past, present and future of live music. And now we have it!

We’ve already watched a bunch of the videos, like The Who’s rocking show at Tanglewood in 1970 that includes “Young Man Blues.”

After watching The Grateful Dead Movie last week and seeing how the movie was re-released with added footage and improved for big screen once again, it was interesting to read what went into the restoration and creating of the Wolfgang Vault concert videos. Here’s a snippet about the process and they explained it on the Wolfgang’s Vault Blog

“Bringing these aging concerts into the Internet era was painstaking work from beginning to end. Utilizing the best facilities available, we sought to gently improve the quality of our video concerts without robbing them of their natural vintage flavor. Once restored, each video was reviewed by our team of music experts to assess quality and catalog information about each performance, including exhaustive research to verify dates and venues of performances, as well as titles and cue points for each individual song — tens of thousands in all from the Bill Graham Archive, the King Biscuit Flower Hour, and the Newport Jazz and Folk Festivals.”

Like the mobile app, the WGV Concert Videos are a fantastic resource for live music fans. And we’re looking forward to seeing how the offering expands as they roll out more videos from current events like SXSW 2011, exclusive live sessions, and classic shows that have been restored for the first time.

We’ll be sharing more of our own exploration of the new concert videos and mobile app as the year unfolds. And we’d love to hear about your experience too. Go check out the Concert Video section of Wolfgang’s Vault!

and let us know what you think.

There you have it — two reasons why I’m love Wolfgang’s Vault in 2011! If not already a member you can sign up for a free account or and read more about WGV here.

It’s always a pleasure to share with you the stuff we love and how live music is changing our lives. And we invite you to share your favorite live music sites and concert experiences in the comments below.