It’s a challenge for all bands.  Some can do it and some can’t. But what can two blues legends teach us about transferring the palpable emotion and energy a band creates in the studio to the live show? Can you teach the “STLS” or is it just something a band either has or doesn’t?

Recently, I was talking with my friend Patrick about our favorite blues musicians.  Now, I should tell you that Patrick plays the guitar and is big fan of the blues, so during our chat he shared with me one his favorite blues recordings: “Mannish Boy” featuring Muddy Waters and Johnny Winter.

It was a great chat because ever since Patrick gave me that recording I’ve listened to it over and over again.

There was something about it that I couldn’t quite put my finger on. Something that connected it to what we feel when we listen to an album and then go see the artist perform it live.

So my curiosity led me to do some digging around on the interwebs and YouTube where I eventually found what I was looking for: a video with a live version of “Mannish Boy.”

And then it hit me.

Listening to both “Mannish Boy” versions together illustrated one of the biggest challenges bands face: transferring the studio energy to their live show, or what I like to call the Studio-To-Live-Show (STLS) energy transfer.

But my exploration and wondering didn’t stop with Waters and Winter.

I took what I discovered with “Mannish Boy” and put it in contemporary context to see how today’s touring bands measure up, or are going about their own STLS.

I started to wonder how, or if, Yeasayer, Matisyahu, LCD Soundsystem, Vampire Weekend, Gorillaz and others will be able to do the same thing.  They’ve all recently spent time in the studio and have current or upcoming tours this year.

So what we’ll do first is uncover the classic “Mannish Boy” blues moment and then we’ll see if today’s bands can measure up to what Waters and Winter accomplished.

In the recording Patrick gave me (mp3 below), you can hear Winter yelling in the background as Waters is playing. It’s as if Winter is pumping up and revving Water’s engine up in a hurry.

It’s a great moment that captures the palpable energy in the studio as the two recorded Hard Again, which was Water’s return to the studio after Winter’s signed him to his Blue Sky label. The album was released in 1977 and the following year Waters and Winter went on tour.

I’ve had many talks with artists about how hard it is to take studio energy and translate it to the live show, or vice versa.

Knowing that, I’ve been amazed at the uniqueness of this “Mannish Boy” recording because it succeeds on both ends; live and in-studio.

Sure, there are a lot of tangible and intangible factors that make both of these “Mannish Boy” recordings so unique. And we could spend hours talking about them and all the nuances.

But for the most part, I think the STLS is something that you can’t teach.

And I think that most of the time a band either has it or doesn’t.

But with the right production a band could pull it off with the help of a gifted live sound crew and studio engineer.

It’s also extremely difficult to re-create the intimacy of a studio recording during a live show because each situation has different elements that make it intimate and memorable for fans.

Things like feeling the crowd around you, or being close to the artist while listening to the album with headphones by yourself, or standing close to the stage, or being able to see the artist during the concert and putting all the 5 senses of the sensory human experience together are what make listening to music on record than going to experience it live so powerful.

And struggle is also faced by a great live band who’s trying to re-create that transcendent live connection with fans live when recording in the studio. I think of the Grateful Dead when I think of  a band who never really made a studio album that truly captured the power and feeling of their live show. You had to get one of their treasured live bootleg tapes that Dead Heads passed around to really feel the communal essence and live energy of the band.

I’m sure you have a list of your favorite bands who made great studio albums but were never able to successfully transform the album into a great live show.

But somehow Waters and Winter succeeded in both settings with “Mannish Boy.” And even though that track and live concert were recorded over thirty years ago, it’s nothing short of amazing that they were able to do so. And judging by the comments on the YouTube video it’s obvious that live concert moment has certainly stood the test of time for fans.

Will Other Bands Be Triumphant in 2010?

Well, so far in 2010, Yeasayer, St. Vincent, LCD Soundsystem, Vampire Weekend, Polysics, Matisyahu, and Gorillaz are all in the process of the Studio-To-Live-Show energy transfer. And all these bands are either touring behind new albums or will be touring this year.

And some of those bands are also in the process of finishing up new albums for release this year and are in the midst of the first part of the STLS transfer as you read this.

What has it been like for all those bands in the studio?  Did they have a “Waters and Winter” moment, too? And if they did, will they be drawing on those moments for inspiration during their live show? And will they be able to triumphantly transfer that studio energy to their tour?

What About The Fans?

Let’s look at things from a fan’s point of view.

Have you been soaking up the new albums of your favorite band and creating expectations for the energy you hope to feel during their live show?

For me, I’ve had Yeasayer’s Odd Blood and Gorillaz’s Plastic Beach on constant rotation since their releases. I’ve loved both of them each time I listen to them, but I’m wondering what their live show will feel like.

Will the band successfully transfer or re-create the same emotional energy I’ve felt while listening to their albums?

Well, so far, I can say that Matisyahu, St. Vincent and Polysics have all released albums that successfully transferred energy in both ways.  But some of them went a different route to do so.

And in the process they created a new version of energy for their live show which I loved just as much as what I felt from their studio album.

The exciting thing about all this STLS energy transfer stuff is that you never know what you’re going to get.

And on any given night an artist can flip the switch, find their groove and really turn up the energy like Winter did for Waters. They can completely surprise you, too!

That said, I’m looking forward to seeing how LCD Soundsystem and Vampire Weekend do with their STLS energy transfer as their tours roll into Chicago later this year.

Conduct Your Own STLS Experiment

I courage you to pick up any of these albums and go check out their live show and tell me what happens. Let me know how it goes and if there’s any difference between what you felt while listening to the album versus experiencing their live show.

What bands do you think have successfully made the  STLS energy transfer?

What bands are you looking forward to experiencing live this year?

You can also get more band touring info on Jambase. 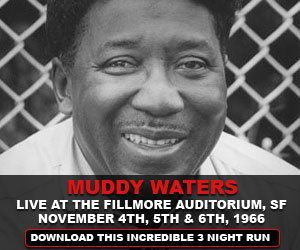