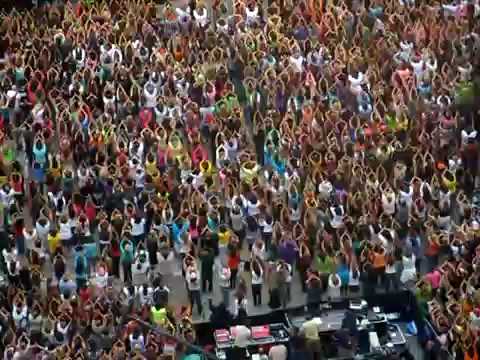 The collective ripple effect of thousands of “Joy Ambassadors” dancing in downtown Chicago during a Black Eyed Peas concert.

Like the rest of Chicago, I was amazed when I saw it (see above video).  And usually mobs are angry and not this beautiful or inspiring to watch.

But this Flash Mob was swarming and surging for a different purpose.

That said,  I had the chance to speak with my friend Jenny Schmidtz who was in the Flash Mob Dance for Oprah’s 24th season Kickoff Party in downtown Chicago. Jenny has practiced various forms of dance for several years so she was kind enough to take some time to talk about her passion for dance and training for the Oprah Flash Mob Dance.

Jenny did a great job of explaining how we as fans all have the power to spread joy during concerts via a contagious “ripple effect.”  She also explained how she was inspired and what it felt like to be in the swarming the mob that looked more like a fantastic pulsing organism of communal celebration.

And though this Dance was expertly choreographed by the same team that did the T-Mobile Flash Mob, the footage of the Oprah Flash Mob still reminds me of  watching the phenomenon of the Dancing Guy.

This 3 Part video interview with Jenny is a first for Live Fix. And I hope to do more video interviews with other fans and artists.  The interview took place on the streets of Chicago so I hope you enjoy it as Jenny tells her Inside the Mob story.

After the interview I gained a new perspective on the Black Eye Peas latest album THE E.N.D. (Energy Never Dies)

.  I’ve haven’t been crazy about “Boom Boom Pow” but I after talking with Jenny I have better idea of what the song “I’ve Gotta Feeling”  can do to a live crowd. So I’ll give the BEPs another chance because I think it must’ve been so hard to wait your turn to dance during the Flash Mob and not be instantly under the influence of the individual.

This interview was lots of fun and special thanks to my wife Colleen who became a videographer for the first time and did a great job!

Part One is below and you can check out Parts 2 & 3 on the Live Fix YouTube Channel.  I invite you to subscribe as I’ll be adding more videos in the coming weeks.

Were you in the Flash Mob?

What did you think when you saw it?