One of the things I love about Live Fix is getting the chance to talk with fans about their concert experiences. I consider it  a huge honor when ever a fellow fan shares their live concert story with me.

And last week I had the pleasure of talking with one of my friends, Dale, about seeing U2 in Chicago for both nights on Sept 12 & 13 at Soldier Field.   Since I wasn’t able to go to the show–because I was busy being lifted by Common & The Roots at a concert down the street from Soldier Field–I had to read U2 Saturday show reviews by Greg Kot and Jim Derogatis the next day to see how the shows went.

But something happened during Sunday’s show that made it one of the most unique U2 concerts ever.

I thank Dale for giving me insight in to Sunday’s show and sharing his photos and tweets, and also telling me that it was his wife’s 27th U2  concert.  That in itself was amazing!

But that’s not all of it.

What was even more amazing to me was what U2 did with their gigantic Claw stage and how they used space satellite technology to make the show a show of a lifetime for Chicago fans.

During their Sunday concert U2 played a track from their 1995 album Passengers.  The track “Your Blue Room” had never been played live before until U2’s Sunday show at Solider Field. And during the show Dale told me that U2 had an ISS crew member “sing” part of the words from the song as the live feed was broadcast live from space on the giant claw video screen. When he told me this, I also wondered if a band had ever used astronauts as part of their live show before.

In any case, this is a great example of a band making the concert experience unique for fans.  Which is something that not a lot of bands try to do.

I’ll admit that I’m not the biggest U2 fan and I’ve had my doubts about their recent album No Line on The Horizon. But when Dale told me about the Sunday concert, and as I looked around YouTube and saw all the fan videos, I gained more respect for U2 when it comes to make a single concert experience unique to loyal fans.

That said, I do hope that U2 doesn’t play “Your Blue Room” at any other shows on their current tour. And that they will find more ways to make each concert a unique experience for fans in other cities.

What do you think bands can do to make shows more unique for fans?

Join other fans and share your unique concert stories. 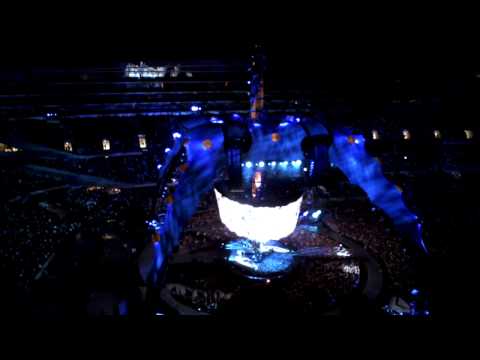