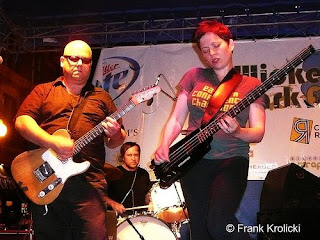 Frank from Windy City Rock posted a review from Wicker Park Fest in Chicago this weekend. And this review included a comment about Grand Duchy‘s pregnant keyboardist. And as you can imagine it got me thinking about many things.

Even so, husband and wife duo Black Francis and Violet Clark, along with Jason Carter on drums and a very pregnant keyboardist named Silver Sorensen (you don’t see a lot of pregnant women on stage at rock and roll shows, it was pretty awesome), delivered a very enjoyable set of their new wave-inspired rock.

Here’s a few random related thoughts that may or may not have any scientific rationality or grounding. They simply popped into my head as I read his review. And I couldn’t help but share them with you in hopes of discussing them with you.

1.  What would the review read like if the baby was to write it from the inside?

2. If we were to ask the baby twenty years from now to recall the show would he or she be able to do so?

3. How much did seeing a pregnant lady on stage influence the show from the fan point of view?

4. Would we consider the baby as part of the band?

5. Would be consider the baby as another instrument in the band?

6.  After her exciting baby bearing performance at the Grammy’s, what would MIA have to say about this performance?

7.  Do fans enjoy seeing pregnant women on stage as much as Frank did?

8. Would you like to see more pregnant women on stage during rock shows?

9.  Will this baby be more inclined to enjoy rock music over any other genre?

10. How many performances have there been in rock history involving pregnant women?

11.  Have you ever seen pregnant performers during a rock concert?

12. Are there stigmas associated with pregnant performers?

That’s all for now. But I’m sure I’ll have more the second I post this.  So we’ll explore them later, too.

What are some of your questions?