The music of Michael Jackson has always held a special spot in my heart, especially after Thriller became one of my favorite albums as a kid growing up in the eighties.  (Update: This post was written two days before Michael Jackson’s death. Please read my response to this unexpectedly timely post here.)

But I have to admit I’ve had my doubts about Michael Jackson returning to the stage to perform 50 shows  in London, a run that’s scheduled to begin the first week of July. And even though I once had a t-shirt with an velvety iron-on picture of Thriller’s cover on it,  Jackson’s attempt to perform again seemed way too strange a story for me to take him seriously.

And now, it seems, that the King of Pop is facing his own doubts and more legal complications as he gets ready for his upcoming London shows Billboard reports:

AEG Live president and CEO Randy Phillips has rejected U.K. tabloid reports that Michael Jackson told fans that he only wanted to play 10 London O2 Arena shows rather than the 50 that have been scheduled.

And them came the legal issues saying Jackson was over committed in his attempt to do 50 London shows. But those same “over booked” shows would also allow Jackson  to pay some of his alleged large  amount of looming legal bills and achieve concert history:

Billboard reports  “Jackson’s series of London shows have been touted as unprecedented. AEG Live says that, all together, the shows will gather the biggest audience ever to see an artist in one city.

But AEG says Jackson will be there ready for the hungry London crowds:

The shows begin July 8, Jackson’s first in 12 years. Producer/promoter AEG Live has footed the bill for a $20 million production, and the show layout is coming together. “Originally we tried to keep the show down to 90 minutes, but Michael has so many must-do songs in his repertoire that the shows now will be two-plus hours,” AEG Live CEO Randy Phillips tells Billboard.

Well, we’ll see how this turns out…

What are your expectations for Jackson’s London shows?

And would you drink lots of Pepsi, grab your crotch and do the moonwalk at the show if he did a This is It! world tour? 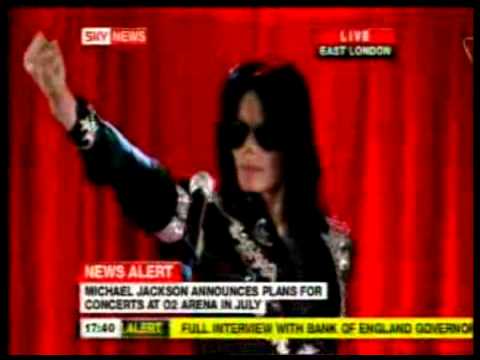