I felt inspired and a bit guilty when I watched this movie. Heavy Metal In Baghdad is a compelling film. So much, that it made me rethink what I love and maybe even take for granted about live music: The freedom to experience it without fearing for my life.

Released in 2007, the documentary film by Vice Films received postive responses at several film festivals during 2008 and wider distribution, so a few weeks back I finally saw it.  And, man, is it a good one!

The film follows “Iraq’s only heavy metal band” Acrassicuada as they struggle to practice, record and play their music live in the war torn Iraq circa 2003-2005. There’s many emotionally riveting scenes in this documentary that would make any musician or live music fan get choked up and teary-eyed.  And though it’s not all happy storytelling, it’s still inspiring to watch the band lay their lives on the line to play live music.

On a personal note, every so often I gravitate toward metal, and lately I’ve been in one of those metal listening phases. So when I watched the scene where Acrassicauda sets up their first live show in 2005 since the US invasion in 2003, I watched in awe as the band, and it’s brave fans, celebrated the pure joy and cathartic release as only oppressed metal fans know how to. But the energy of these fans seemed to transcend the typical outpouring of rage of heavy metal crowds I’ve seen before.

Here are a few other moments in Heavy Metal In Baghdad that stood out to me.

I also learned about the obstacles Acrassicauda faced when merging metal culture’s head-banging with Islamic customs and Iraqi law. The band explained that it wasn’t the music that made it hard for them to perform live but it was when the crowd started head-banging that Iraqi officals had a problem, largely because the head-banging was misunderstood because it resembled the same motion used during Jewish prayer.

That quote gripped me the most. It  was said by one of the band members as Acrassicauda prepared for their concert in an the abandoned Al-Fanar  hotel as morters exploded outside and electricity to the building flickered on and off, while the building rumbled from Blackhawk helicopters and fighter jet air raids. The quote also summed up Acrassicauda’s strong solidarity to fight against the live music oppression that they faced.

Here in the United States we often take for granted the right to play and experience live music. I’m sure we’d fight for it if it ever came down to it. But in Acrassicauda’s case they were risking their lives to do so. And for them it was a matter of emotional survival as they battled through an eventually destroyed practice space and then they were forced to become refuges and flee to Syria.

Today, according to the band’s website, Acrassicauda is in the United States and building on the EP they recorded in Damascus in 2005.  I can’t say it enough, Heavy Metal In Baghdad is required viewing for any live music fan who’s looking to connect with other live music fans and bands in other cutlures  fighting to play their hearts out and doing so with pure abandon.

Cited many times in HMIB is the band’s love for Metallica. Here’s a clip as the band meets frontman James Hetfield who gives them a signed guitar backstage after a U.S. show earlier this year. The look on Acrassicauda’s collective face says it all. 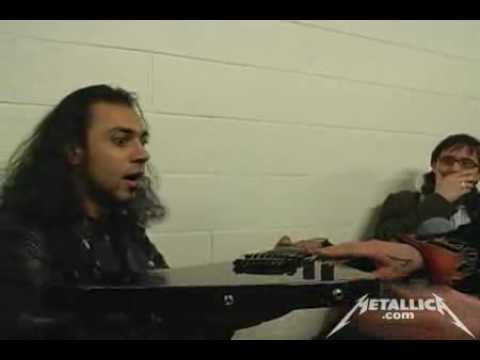