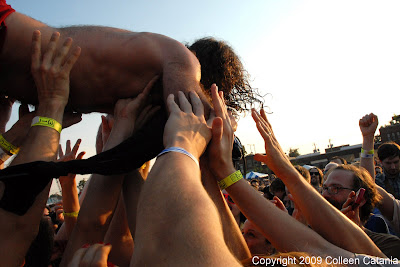 Why is live music so sensual?

Well, I think finding an answer to that question begins with our largest organ: our skin.

The one thing that seems to connect live music, sex and sensuality is our sense of touch. This sensitive relationship is both something we take for granted and can’t live without.

As I’ve explored before, our skin plays a huge role in allowing us to “feel” live music.

From rumbling towers of speakers and subwoofers to the crowd’s decibel-shattering roar to sweaty crowd surfers hovering above smoldering mosh pits, the sensations our skin transmits to our brain’s pleasure center cannot be underestimated.

Why was I thinking about all this?

Now, I’m not a touchy-feely kinda person, but I do understand the power that touch has in human non-verbal communication. I’ve also noticed that sometimes I’m open to being bumped into at concerts but other times it’s annoying and distracting.

So it makes perfect sense that it would also play a huge role in our pleasure levels during the live music experience.

But for some reason we take it for granted.

Or maybe we just don’t see the connection because the interaction between the music and our touch sensors is invisible. Meaning that we can’t “see” the sound vibrations that flow through the air and connect with our skin’s touch receptors. If we could then maybe we would understand and appreciate the connection on a deeper level.

Or maybe it’s because we’re stimulated so much on a daily basis that we don’t even realize how fast our bodies process touch stimulation and influence our pleasure levels during a live concert.

Knowing this, it makes perfect sense that sex is part of the unholy trinity of drugs sex and rock ‘n roll. But do we really consider how many similarities there are between sex and live music, or between everyday human interaction and live music?

So then I wondered if there were people who are addicted, or if there are certain diseases that turn our sense of touch against us.

Looking back on past concert reviews, I’ve often wondered if physical discomfort or pain has influenced my review of a show without me even being aware of it. And the compelling medical studies done recently have shown music helping people heal physical pain. So I might be on to something there.

But what about the fun side of touch? I can personally attest to having an addiction to the sound and feel of popping bubble wrap. And I’ve often wondered about the possibilities of creating an entire room of bubble wrap to overload the pleasure of full-body touch (and sound) stimulation.

Wouldn’t it be cool if a band played a concert in a venue covered in bubble wrap? What would that feel and sound like?

To heighten the whole sensuality of the experience, nightclubs often go out of their way to add some element of touch to the show via dropping balloons or filling the floor with bubbles and squishy suds. And when it comes to drugs, clubbers and fans are known to use Ecstasy to enhance their sensory experience, and it’s one of the most frequently used, and addictive, touch enhancers.

And when was the last time a live show touched you?