With a new album freshly released last week, U2 ubiquity was in full swing.

I just wish the new album was equally swinging.

Often, I listen to new albums while on the way to a show, and this past weekend while on my way to cover N.A.S.A. at the Abbey Pub, I finished listening to No Line on the Horizon. I had listened to the first few tracks earlier in the week and had prematurely boasted to my wife about how good the album was.

So then as we headed to the show, and we listened to the rest of the album, my expectations came crashing down. Fast. And Colleen looked at me like I was nuts because I told her that the album was pretty good so far.

This whole experience got me thinking about the practice of touring and how bands use it to promote and create buzz for an album. Of course, there’s the catch-22 of a generating buzz for a new album and touring: depending on how big or popular a band is, they can tour to create interest or tour to give fans the “live” version of the new album. But if the initial buzz about the new album isn’t there then touring is hard to justify.

But in the case of U2, touring is needed to add shine emotional meaning to what appears to be a lackluster and emotionally scattered album. And their 5 night residency on the David Letterman show was attacking both ends of the catch-22 of new album promotion and touring.

I didn’t have the chance to see the shows, but by watching the YouTube videos and reading this Prefix article, generating buzz and adding more meaning and performance emotion to the awkward and strange “Get on Your Boots,” appears to be Bono’s mission during their week-long residency last week on the David Letterman show.

This residency is a good start. U2 is going to need the live show and touring to help connect the new album to the hearts of the faithful because according to this Idolator article, and my aforementioned reasons, the first week album sales aren’t quite meeting expectations or previous numbers from U2’s last album How to Dismantle an Atomic Bomb.

I’m not the biggest U2 fan, but I know that their live show can be a massive event of glorious grandeur that, as a collective communal experience, can transcend a merger album, slow sales and below-average songs.

But will fans go to the concerts to hear the few good songs on the NLOTH (notably the title track “No Line on The Horizon” or “Magnificent”) or pay only to relish in the glory of U2’s past hits, hoping that the new songs take on a deeper meaning in a live setting? 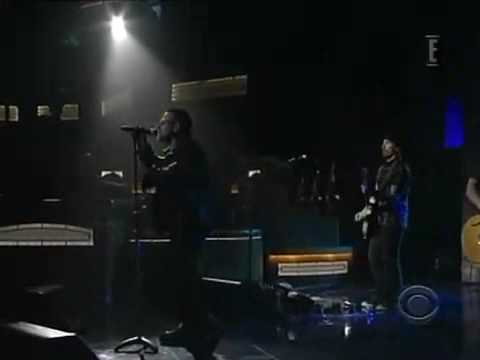