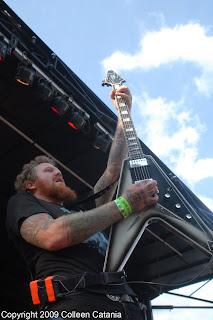 Mainly because, in this Rocksound article, metal band Mastodon says they want to “create a more visually stimulating live show” this summer in conjunctions with their new album and tour. When I saw them at Pitchfork in 2007 it was the howling burst of drums, guitars and rumbling bass that sent me into a sensory frenzy of shaking my skin (touch) and ears (sound). If they’re going to add stimulating visuals then I can’t wait to see what that would be like.

But do rock concerts have the power to be a tool to help the visually impaired?

After I dug around a bit, I discovered some recent neurological research to backup and further my thought. And I found that there is a connection.

This 2006 Science Daily article had a few things to say about my thoughts about the possible healing and developmental power of visual stimulation:

“A new study focusing on the molecular roots of plasticity has found that visual stimulus turns up the expression of some genes and turns down the expression of others, somewhat like a conductor cueing the members of an orchestra. The study also found that during different stages of life in rodents, distinct sets of genes spring into action in response to visual input. These gene sets may work in concert to allow synapses and neural circuits to respond to visual activity and shape the brain, reports the May issue of Nature Neuroscience.”

“The researchers found other sets of genes superimposed on this core pathway, but these sets are turned on and off by vision at specific ages before, during and after the critical period and into adulthood.”

“This suggests that sensory experience regulates different genes in your brain depending on your age and past experience,” said Shatz. “Thus, nurture, our experience of the world via our senses, acts through nature, sets of genes, to alter brain circuits.”

“These discoveries may lead to new ways of thinking about genetic therapies to correct early vision disorders. Because the brain is so altered by abnormal vision, restoring vision to a child afflicted with cataracts or strabismus, an eye misalignment which can impair vision, may not be enough to correct the damage. Nor will treatment involving single gene replacement.”

This study helps explain why it is that children learn so quickly and easily, and it lends credence to the idea that, in adults, mental activity leads to mental agility.

Sometime my thoughts and theories are pretty out there and hard to back up with concrete findings, so I was amazed at how close my theory about stimulation at concerts was related to helping visually impaired people (and rats) of all ages. 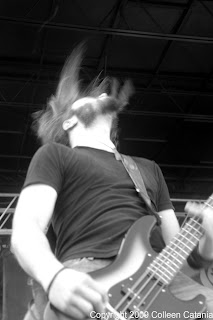 So it appears this summer’s Mastodon tour might be helping the youth and older rock fans with their mental activity and lifelong agility—and not just contributing to hearing loss.

So does this mean that there is a give and take between our eyes and ears when we go to concerts?

And at what point do the two begin to counteract each other?

Or could certain rock concerts with high amounts of visual stimulation—pyrotechnics, flashing lights, outrageous costumes etc.—actually be a benefit to our brain’s development?

I’ll have to dig deeper for answers to those questions. But at least I have a deeper understanding of why performances by Of Montreal, Saul Williams, Radiohead, David Bowie, KISS and other similar visually stimulating acts have such a huge response from fans. The artists might not be intentional about improving our mental activity or agility, but there’s definitely something going on in our brain that’s worth understanding.

If we look deeper into this, might we find that a concert is not as fun if it’s not visually stimulating?

Maybe it’s not all about our ears hearing a good concert. Maybe it’s what we see and not what we hear that makes a concert great.