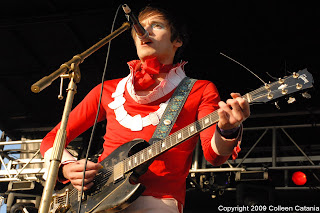 Do we expect anxiety and tension at a rock show?

If it’s not there at some level do we feel jipped?

In a Paste interview Of Montreal’s front man Kevin Barnes revealed that your emotions are at the center of his performance plan to create large amounts of “confusion and tension” during their live show.

“Yes, it’s possible we’re taking away from the music,” [Barnes]says as we discuss Of Montreal’s Langerado performance, “but I don’t really care. If people just want to hear the songs, they can listen to the record. Most performers aren’t really that ambitious as far as what they want to do for the audience. For this new tour, we’re going to play more with tension and try to create anxiety in the audience, so it’s not always just happiness, but also moments of fear and tension and confusion, which comes closer to the emotional depth we all have within ourselves.”

Seeing Of Montreal at Pitchfork 2007 was quite the experience to say the least. And I did experience all of those emotions he mentions (in various ways and at certain levels) whether he’s using face paint, a large horse, buckets of confetti, or his band of interpretive costumed dancers. Even though I didn’t write about it, what Barnes created made the Pitchfork show unforgettable and deepened the album experience as I’ve revisited Of Montreal albums ever since.

And when I listened to this NPR All Songs Considered live show and interview I began to wonder even more: to what extent and how often we expect artists to sacrifice their “music” just so we can have a deeply emotional experience?