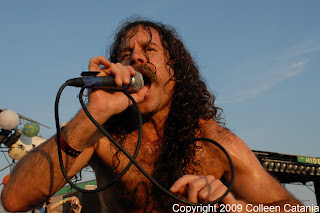 I’ve said what I thought about how others picked their favorite concerts of 2008, so now it’s time to give you my picks…and why.

What makes a show “the best”?

I often wonder this because there’s a lot to consider when creating a list of the best concerts, or shall I say best concert “experiences” of 2008. The venue, the bands, the performance and the buzz surrounding the show are just a few of the factors that can make a show greater (or appear) than others.

A band might have played a technically perfect show but completely tanked on the emotional performance, or vice versa. And if I had to choose, I’d take an emotionally perfect performance over a technical virtuoso spectacle any day; because the virtuoso artist get so absorbed in their own skill that the audience gets left behind. But if virtuoso skill and emotional power converge, then usually the show is what most of us would call “amazingly mind-blowing” or “awesome!”

Most of my favorite concert experiences this year had the aforementioned ingredients. But my favorite favorites also had a combined quality of insight and complete surprise because I had the honor of speaking with the artist before the show. (I’ll examine this topic in future posts.)

I created my own unlist “categories” because we all know that lists are inherently flawed and completely subjective even though we love them so much for what they do and don’t do. And when it comes to remembering the significance of our live music experiences ranked lists seem to work as an easy method for cataloging and remembering our live music emotional peaks and valleys.

So without further ado…Here’s my Best Concerts of 2008 Unlist:

Best performance that refocused a tour and erased a terrible show at Bonnaroo: Kanye West

Best show where the line between band and fan was gloriously obliterated: Monotonix

Show that gave me the longest post-show buzz: Saul Williams

Honorable Unmentions: I know I might be in the minority but I wasn’t completely swept away by either Fleet Foxes or Vampire Weekend sets at Pitchfork. Vampire Weekend seemed stiff and untested and though their album was ubiquitous their live show wasn’t impressive. Fleet Foxes in the park was a nice touch but I think a darkened indoor venue will serve them better. I look forward to that.

Looking back most of my favorite experiences happened at the same festival but each experience was completely different. What does this tell me about my emotional journey during my concertgoing adventures this year?

I’ll have to think about that because, even though there I had other favorite concert experiences of 2008, we all know lists can only be so long.