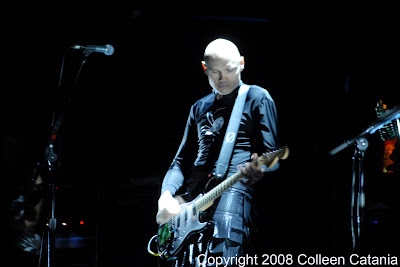 This Popmatters Smashing Pumpkins review brought my 2008 concert reviewing to a dramatic close. And it was by far the most drawn out concert experience of the year. But still, I managed to come away with more than I thought I would.

It started when I questioned the mental landscape of The Great Pumpkin and his fans.

Then on Nov 22, along with other fans, I had to deal with disappointment after the show was postponed to Dec 8th. Then after posting on Popmatters’ Notes From the Road blog, I felt the wrath of Corgan-defending Smashing Pumpkins fan who also were kind enough to point out my minor slip up in journalistic fact reporting.

But this surly fan comment experience also showed me that there is a sliding scale when it comes to Smashing Pumpkins fans. Depending on age, level of commitment and which album they enjoy the most, Pumpkins fans, on any giving day, at any given concert, can be hopefully tolerant or openly harsh, very nice or very mean to fellow fans or to anyone who might call out them on their behavior, or question the Great Pumpkin’s ever changing mood and musical ambitions and the ramifications there of.

Going into 2009, I certainly have a better idea of what makes certain fans tick.

So how about you?

What would transform you from a passive consumer into an active participant in the live music experience?