What would a MRI scan of my brain look like during a concert of my favorite band? And what would the scan reveal about how much the concert mattered to me?

I began wondering about this after I received a traffic citation from the City of Chicago, informing me that on October 24th, while on my way to interview and review Secret Machines at the Metro, I was caught on a city stop light camera.

Though these cameras are a ridiculous excuse to make money for the City of Chicago, the video did spark an interesting train of thought.

From its perch high atop the stoplight post, this camera captured a picture and video of my car allegedly speeding through the red light. And inside the car was me and my head. And inside my head was my brain. And inside my brain was the firing of thosands of synapses and fertile concert-ready brain matter.

So as I sped through the intersection, deftly avoiding an accident, I was also thinking about the interview and concert I was heading to.

But of course this video camera did not capture what was going on inside my brain. Because if it did, then I would have been more than willing to pay for the fee of seeing what my brain looked like while I created a pre-concert in my mind.

What is a pre-concert?

I created this term after I watched the video for the hundredth time, realizing that in most situations I create an emotion-based virtual concert in my mind before the concert as I think of all the songs I hope to hear, and emotions I hope to feel during the real concert.

The expectations created during a pre-concert can either set a fan up for complete euphoria or utter disappointment, depending on how close the actual performance matches, exceeds or falls short of the pre-concert experience.

Do all live music fans create pre-concerts before the show?

Only fans that are on polar-opposite ends of the expectations spectrum can truly create a true pre-concert in their mind. Fans who are indifferent or don’t care about the show they’re heading to do not possess the necessary flow of negative or positive emotions. Their emotional state is too placid and not fertile enough to build pre-concert venue on. You have to either hate or love the show you are about to see in order to have a pre-concert experience. Your brain has to have something to feed off of. 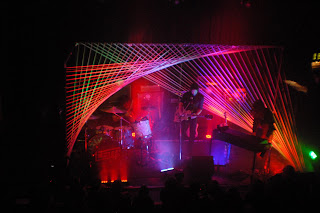 As I mentioned, only the fully invested fan gets to enjoy a pre-concert because it’s the rush of expectations and building anticipation that drives the whole process of creating a pre-concert. If don’t have those emotions flowing and bouncing around in your head then you don’t get the pleasure of all the emotional benefits. There’s no prize for riding the fence. You must choose a side to get you pre-concert ticket. It’s a gamble: just like when you buy a ticket and you’re guaranteed a great show.

So what are the raw materials used to build the cerebral venue that houses this pre-concert experience?

Emotions. Previous concerts. A new album. These are just some of the building blocks that my mind used to create the pre-concert. And I would imagine that these raw materials are common to most fans as we all go to shows of our favorite bands with one, or a combination of, these exploding in our minds.

Did my pre-concert experience have any real impact on the show? Did it make the show better or worse?

I was excited, anxious and nervous before heading to the Secret Machines concert. The presence, activity and influence of those emotions did have a positive impact on the show.

Yes, and it also exceeded the pre-concert because I didn’t expect the rush of fan community and outburst of pleasure during certain songs and chorus. I also didn’t expect to be treated to such a stimulating visual spectacle which enhanced the music.

Seeing images that represent what our bodies are actually doing helps us to understand what makes us tick.

Ever since I saw that traffic video, I’ve been wondering what a MRI brain scan would look if I had a scan during my pre-concert experience and one during the real concert.

Would the images show similar results? If they did, what does this mean about how we set ourselves up to enjoy a show?

Do we really have that much control over the amount of pleasure we have at a concert? I know I didn’t have much say in whether or not I had to pay the stupid citation fee, but I know now that I do have some control of how good or bad a live show can be. Now I just have to figure out how to get that pre-concert and live concert MRI brain scan.