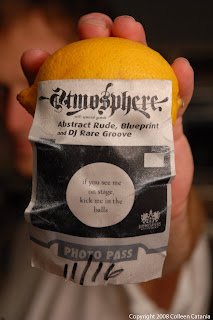 Do fans deserve or pay for the right to get thrown off stages and kicked in the balls?

Is that what the fine print reads on our ticket stubs?

When my wife and I got the humorous photo/press pass (see photo) for Atmosphere’s Nov 16th Chicago show, I started to wonder what is the point of drawing a line between the artists and the fan.

And when the nasty snafu that Akon got himself into last year finally was resolved this week, I really started to wonder who really benefits when the fans or artist cross the line and enter into each other’s space.

Does the artist hope that fans will do something to add energy to the show?

It certainly couldn’t have put a dent in Akon’s ubiquitous notoriety, could it?

So where exactly is the line between artist and fan during a live show?

Should fans going to rowdy punk rock or hip hop shows expect the line to be crossed?

As a member of the media I’m often (as the media pass shows) told that I can only go so far to get the details I need to tell the story of the concert that night. And if I go beyond those boundaries I could face consequences.

I took the tongue-in-cheek advice from Atmosphere and stayed off the stage lest I get “kicked in the balls.”

But maybe I should have voyaged onstage to experiment with this idea. But at what cost? Getting kicked in the balls?

Sorry. No. I don’t love live music that much.

But…maybe for the sake of the experiment I would have.

If so, I think you need to talk to the kid Akon tossed off the stage and let me know if you change your mind.

But really, would live music be as fun, intense or exciting if there wasn’t a line to cross?