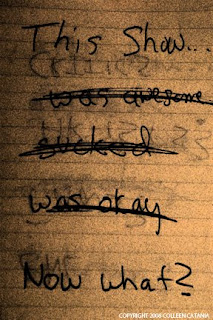 Go ahead. Tell me.

I can handle it…

just as long as I don’t end up like music journalist Don Rosenberg.

Though, I’ve never been “removed” from a beat like Cleveland Plain Dealer music critic Don Rosenberg who was removed from his Cleveland Orchestra beat in September, I have been the recipient of harsh criticism for writing about a performance truthfully and honestly.

And I can tell you that, like any self-respecting journalist, I’d rather write truthfully and take the scorn from the artists or fans, than blow smoke up an artist’s rear end just to avoid getting reamed out.

I’ll always remember receiving a Myspace message from a band leader (who I won’t mention) who felt my live review was “plagiarized crap” and then proceeded to call me some nasty names.

I had given positive reviews of the band’s music and recent album, and I still am a fan of the band, even though his comments were out of line and he did eventually apologize.

Since then I’ve been able to better understand what he was trying to say and that the message he sent me also came on the heels of inner turmoil within the band. He also explained the message was more of a sounding board for his emotions at the time than a attempt to set me straight.

Yes, making music is an emotional process made and consumed by emotional beings who usually have a hard time keeping ourselves under control. But I don’t think musicians, fans or critics should use each other as sounding boards for their respective emotional rage.

So what is the purpose of a live concert review?

As wiser music critic once told me, the best live reviews should do three things; Enlighten, Entertain and Educate.

Whatever combination of those three a critic is using, the review should be a reflection of the emotional response between the band and the fans. A good review captures that connection, or says plainly that it didn’t happen, and why.

If that’s accomplished, then fans, artists and critics should look at a review not as an antagonizing sword trying to someone down but as a brief chance to have an emotional moment reflected back at us.

And if done right, that reflective moment should capture the emotional atmosphere in the venue, explaining how the fans responded to the playing–or lack thereof–the band.

Of course, every review is going to have its subjective flaws (and I’ve always wondered what the ratio even is for reviews written and then read by artists or fans) but either way, having a constant negative approach to criticism isn’t good for music writing: for an artist or a critic.

Reading this story I gathered that Rosenberg was telling the truth. He was balancing the positive with the negative. And this quote from his friend Tim Smith, who broke the story on his Baltimore Sun blog, is spot on when he reaches way back quoting novelist Somerset Maugham. I’m not sure if Maugham ever wrote a live concert review but in this quote he seems to have been able to see it from the critics point of view.

“Like Somerset Maugham wrote: “People ask you for criticism, but they only want praise.” Smith continues, “Any orchestra’s player, conductor, board member, lofty patron or ordinary ticket-buy who only wants to read praise has missed the whole point of the artistic process. Not to mention a free press. Then again, any newspaper that would silence a serious, bona-fide voice because some people don’t like hearing it may need a refresher course, too.”

Ever since the story broke, other critics have rallied around Rosenberg via Smith’s blog and other spots on the web, expressing their outrage and concern for the future of music criticism.

But what about the fans? 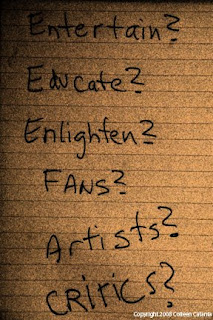 What happens when the fans are forced to read censored music criticism and not enjoy the beautiful balance of a deft critic who can both unleash an entertaining word-lashing and deliver beautiful praise?

I know that the strength of a music writer come in his or her ability to go both love and hate on their favorite music.

There’s already a girth of watered down music writing out there. Censorship is nothing new, but what I’ve found during my time as a music writer is that most types of censorship also involve an underlying element of fear to tell it like is.

And this fear gets propagated when writers give into the fear of alien thating fans and the artist. And the sad part about this emotional deception is that giving into the fear seems like the right thing to do because we trick ourselves into it’s wrong to offend anyone, make them feel bad. We’d rather give into a emotioanl myth than risk tarnish their reputations versus telling the truth.

And in most 20/20 hindsight situation, the truth would have served everyone better.

I’ll be honest with you, too.

Whether large or small, I struggle with this fear of alienating (or the universal writer’s fear of rejection) when writing reviews or crafting interviews. Even writing this blog drove me nuts but I forced myself to write what I felt was honest and true to my experience(or you can tell me if you felt a draft up your back-side while reading this.)

I don’t like to make anyone feel or look bad just to do it. What sane person does?

And I know the fact that I struggle with this doesn’t make me a bad music journalist.

It’s actually the opposite.

Every time I sit down to write a story about what I’ve felt(or didn’t) about a music performance, I’m choosing to put my emotions and thoughts out there in hopes that there’s a bit of truth in what I’ve written that connects with readers.

And when I started writing about music, I thought this struggle would get easier.

But the opposite has happened. It’s gotten harder.

But it’s a good harder.

And when it comes down to it, if I really do care about people and music, than telling the truth is my only option.

And hey, even though telling the truth takes more physical and emotional energy(even when I don’t get it exactly right), it’s always better than bending over to blow air up any artist’s rear end.

Have you read any concert reviews lately that read (or smelled) like they just passed through the rear end of an artist?