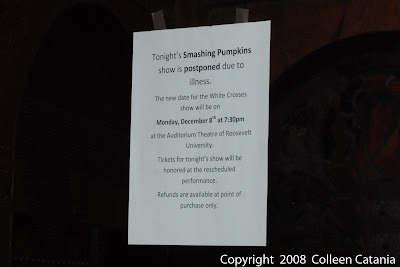 “Hello, this is Ticketmaster Customer Service with an important alert for your upcoming event scheduled at Auditorium Theatre on Saturday, November 22, 2008, at 7:30PM, has been postponed. The new date is Monday, December 8, 2008, at 7:30PM. Original tickets will be honored for the new date, or you may obtain a refund by following the instructions below for your applicable delivery method.

If your tickets were sent to you via ticketFast or were being held at the box office Will Call Window, you may request a refund by contacting Ticketmaster Customer Service no later than Monday, December 8, 2008.”

That was the email alert message I found when I got back from the Smashing Pumpkins show that never happened Saturday night. 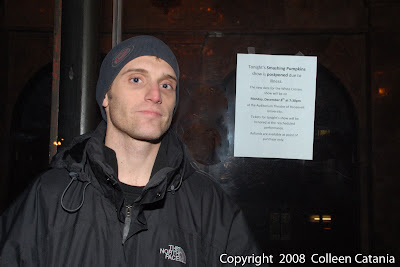 Had I received the above email memo I would not have been standing in the freezing cold, like the other fans who stood starring at the posted note in frozen in shock, disappointment and brooding anger.

In all my calculations of what could’ve happened on Saturday night, I have to say I didn’t account for a postponement. It was quite the scene outside the Auditorium Theatre as I and other fans vented with each other fans as we all clearly didn’t get the memo,or have time to check out the Smashing Pumpkins website about the postponed show.

Go figure, the one day in the last six months that I’m not glued to my computer and the internet all day and it turns out I miss important info because of it.

But ya know what? Missing the memo actually allowed me to connect with other fans in a way that I haven’t before. It was really a highly insightful moment into fan emotion as I acted as a sounding board as fans expressed their dashed expectations. Read more about how I learned how bad other fans had it on Saturday night here on my Popmatters Notes From the Road blog post late Saturday night.

If a band has ever faced the challenge of winning back what fans they had before Saturday night’s postponed show, the Smashing Pumpkins have a huge task in front of them. And I’m even more curious to see what happens on December 8th. I know I’ll be there because I paid the 80 bucks and I have to pen a review. I’ll also be there to see how the fans handle it.

In the meantime, tell me what you think of this video that was brought to my attention via a snarky comment on the Popmatters blog post. It was recorded after Friday night’s show. 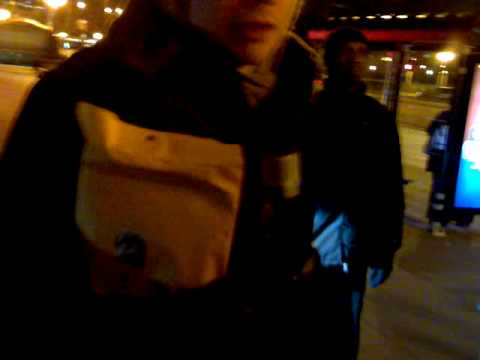