Can AC/DC, innocence and escapism coexist in the same room at the same time?

I think so and I’ll tell you how.

Last Sunday during my nephew’s 1st birthday party , I had a really cool unexpected live music conversation about rock giants AC/DC. I was told by someone else at the party that my wife’s uncle George had seen them last week at the Allstate Arena, so while we were munching beef sandwiches I asked him what it was like and to compare it to the last concert he’d been to—which led to another really cool conversation about Stevie Ray Vaughn.

When I asked where his seats were he said, “in just the right place..close enough to see everything and far enough away to not get blasted away. It was a great show!”

Once we both recovered from the ticket price shock chat, I asked him what was the last concert he saw since AC/DC last week was. He said it was Stevie Ray Vaughn and Jeff Beck at the Rosemont Horizon (before it became the Allstate Arena) in 1989, a year before Vaughn was killed in the helicopter crash at near Alpine Valley, IL. That concert, he explained, was special to him because he had the chance to see two of his favorite guitar greats he had wanted to see for a long time. And, of course, he had no idea it would be the last chance he would ever have to see Stevie Ray Vaughn in concert.

When I asked him if he had noticed any change in his hearing, volume level, or just the overall physical concert experience from Vaughn in 1989 to AC/DC last week, he said not really and that he went to AC/DC, along with his wife, ready to rock, trying to get the most out of the $165.

George then paused and segued into explaining about a memorable Pink Floyd concert experience in 1978. His eyes opened wide as he remembered the moment telling me how the sound was better than he expected at Soldier Field because Pink Floyd was using the sound system from the 1976 Olympics.

After we talked I thought how amazing it was that we covered thirty years of concert experiences in less than thirty minutes. What I love about conversations like these is learning how much fans really love live music by asking them to recall their recent or favorite concert experiences. I almost always gain a new perspective or remember something I forgot about why I love live music. But what I value most of all, is the insight I gain into how important live music is to our everyday lives and how strongly it connects all of us, collectively meeting our very basic, but vital, human need for a moment of escapism.

At the end of our chat, George also explained that his daughter went to her first concert in May seeing Kanye West and she had a great time, so as my nephew unwrapped his mound of presents, I wondered what would be his first live concert experience and what he would say about it. It was truly a rare moment when AC/DC, innocence and escapism all coexisted in one afternoon.

For your other senses:

Here’s a short fan camera clip that gives add some sight and sound to my conversation the AC/DC Chicago show. Like the classic AC/DC song–and most fan concert clips–it’s dirty and done dirt cheap.

Got something to say?

If you’re over the age of one, please leave a comment or email me about a cool conversation you’ve just had about live music. If you’re under the age of one please have an adult type your email for you. 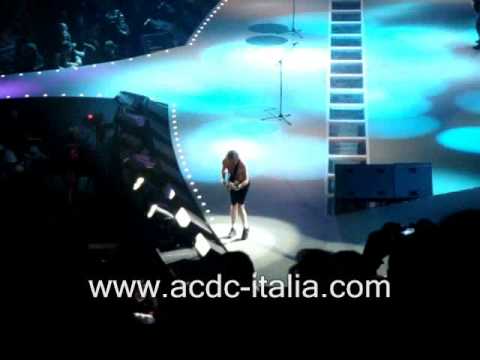