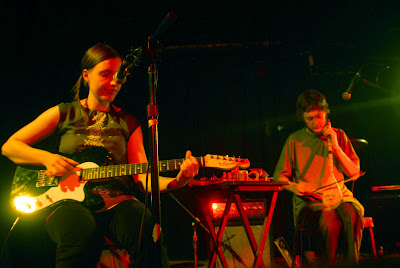 Have you ever been surprised by a band that went on before the band you were there to see?

During The Wire’s Adventures in Modern Music Festival I was presented with a moment where my eyes were dazzled just as much as my ears.

But the awe began even before Lau Nau took the stage.

I was enthralled as I studied the tray of small trinket-like instruments that were on a table between two chairs on stage.

I began to wonder what was going to happen and how these little toyish objects were going to fit into their set. 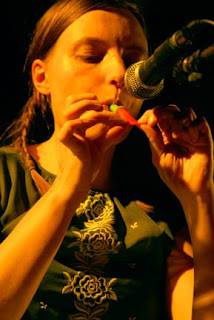 I love it when a band reveals a bit of their musical character before they take the stage, creating, as this did, much curiosity and allure, roping me in even before the music started.

As Lau Nau played, I watched them perform. And I was captivated, to say the least, by their deft ability to work live real-time magic with the loop machine and a table full of toys that when they started playing them turned into agile and wonderful wood wind instruments.

Mixing in some delicate and amusing conversation about getting their instruments through customs, for the entire set, the duo transfixed the crowd into a sublime hush of amazement with percussive loops of hypnotic rhythms.

Giving even more credit to their magical playing, they managed to silence a sold out crowd and the proverbial idle chatters in the background at the bar who quickly shut their yaps when they got a look and heard what the duo was doing on stage. 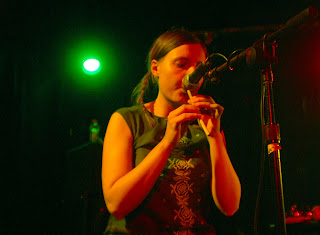 My second point that I wanted to bring up was this recent spotting of expert use of live looping that I’ve seen play a huge role in my last few shows.

I saw Andrew Bird work his magic the first week of September at the Pritzker Pavilion.

I’ve seen other bands use the loop machine in different ways to create certain elements live that you usually can only hear on the album.

And that’s what it felt like during Lau Nau’s set.

I felt as if I was in the studio with them as they were building the tracks.

It felt so intimate and so fresh and the sense of innocence permeating from the music was enhanced as we all watched Laura Naukkarinen whistle, warble and lightly croon different versions of her voice into a live multi-layered tapestry of percussive folk and entrancing electronica.

It was a beautifully primitive set that captivated and inspired me.

And most importantly it showed, again, how artists are still continuing to experiment with the dynamics of a live show, mixing studio elements with live show elements and coming up with an experience that is truly unique and fresh via the looping machine.

In the wake of these two shows, I’ve begun to dig deeper to see the history behind this live looping craft to see how it’s evolved and what other artist are doing with it. I’ll be sharing what I find with you in future posts.

If you have seen Lau Nau or Andrew Bird before or have wondered about the craft of live looping or do it in your live set, let me know what you think…