I’ve heard about this as I’ve chatted with other rock writers at festivals this summer, so I thought I take a deeper look into the what and how’s and why’s of this clubbing experience that started in the Netherlands circa 2005.

According to Wikipedia, silent disco began as a:

The idea of a silent disco has been around since eco-activists found that the easiest way to get large numbers of people into certain areas, such as a forest that was being logged, was to put on a party. However a party could cause distress to animals living in the area as the noise generated by such an event could be wholly disruptive. So a solution was needed for particularly sensitive areas, a solution that could incorporate a party whilst limiting impact upon local wildlife. A suggestion of playing music over headphones would not only limit sound disruption but also give those attending the opportunity to experience a new form of party. Thus the concept of a Silent disco was born.

Another account says that it began via theatre sound design.

In any case, however it started, it has since evolved into a communal “quiet-clubbing” experience that involves clubbers and festivalgoers listening to music supplied by an onsite DJ via multiple channels through wireless headphones also supplied at the festival.

And as noted by CNN Silent Disco has spread to festivals like Glastonbury and Bonnaroo over the last three years.

I’ve never participated in a Silent Disco but by the looks of it the moniker should also evolve along with how the experience is at a festival. It’s gone from a means to actually silently enjoying music with a large group of people in a club;

and now in 2008 more closely resembles a peculiar hybrid that’s a cross between karaoke, listening alone to your favorite album in your bedroom and the live communal concert experience, an experience that also seems similar to what it might be like while traveling on public transportation and the person next to you starts signing somewhat out loud (but still controlled) because they love the song so much they can’t help it but still want to respect the rules of being “quiet.” The same seems to be happening with fans at the festival.

But in most cases, it seems that most silentdiscoers, of the festival variety, have a hard time being silent when the chorus of their favorite song (i.e. Nirvana’s Smells Like Teen Spirit) comes over the headphones.

In that case, maybe they can rebrand the festival version, calling it… “should-be-silent-but-if-you-want-to-sing-along-with-your-fellow-headphoned-mates-please-sing-softly-Disco.”

Have you been to a Silent Disco?

Take off your headphones and tell me all about it.

Or just nod your head “yes.” 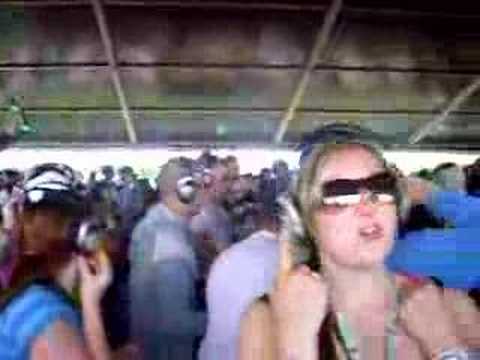