I’ve been waiting for the right moment to spill a few words about Mr. Love On The Rocks.

And like my loyalty to the Cubs, my emotional connection to Neil Diamond rests largely in the fact that my dad has always been a huge fan, so growing up with “Coming to America” and “Sweet Caroline” blasting from the family record player ever since I was a toddler has made it nearly impossible not to appreciate Diamond’s live performance.

But, I’ll be honest with you.

Sadly, though, I haven’t seen him live and reading about his recent tour and pre-show regimen just adds to the respect for one of the best songwriters and performers in pop music history.

And then there’s his loyalty to his fans.

And he eventually offered a refund for the show during which he apparently sang with a raspy voice that was eventually diagnosed as acute laryngitis.

Here’s what his fans had to say on the website forums:

I was honored to be at the Columbus concert. It was the first time I had seen Neil in concert. I enjoyed the concert along with thousands of other fans. I appreciate Neil being there even though he wasn’t feeling well. I hope he returns to Columbus but don’t blame him if he doesn’t. I and my friends don’t want our money back.
Take care Neil, and I hope to see you again.

This show.. might not have been in the top ten best Neil Diamond shows.. but.. even though he was sick.. you still see the heart and soul that he put into giving it his all. This was the first time I ever had the chance to see Neil live… and it almost did not happen. But as luck would have it.. we were able to go. For that.. I am so thankful. Thank you Neil for a wonderful time : ) and we hope to see you again when you come thru Columbus.

A few weeks prior, this August 12th NY Times article allowed for a behind the scenes look at Diamond’s recent touring regime that includes “on tour, he has his meals sent by FedEx every day from a dietary consultant in California. Backstage at the XL Center, he warmed up his band with light calisthenics”

And then there’s his equally impressive drive to play live and record music.

“So looking back and seeing that it’s been over 40 years since the first hits makes you think, ‘Is there a time that you stop?’ ” Diamond continued. “But I don’t think I’m ever going to stop. It’s the only challenge I have left in my life.”

His only challenge? How often do we see live shows as challenges for artists?

Or do we only see it as an opportunity for us to escape?

I know there’s a lot of independent artist out there fighting every night for a spot to play their music live. And on the flip side there’s also a lot of artist who take their fans (and their cash) for granted.

And how often do artists offer a refund for a bad show? I’ve been to many bad shows and never been offered a refund.

But whether you’re a Diamond fan or not, he certainly has shown what it means to deliver his best for his fans and continue to push himself to play the music he wants to, a balancing act that not many artists can boast about, and also sells out shows or sells records.

Here’s a bumby but effective fan video clip from the Ohio show: 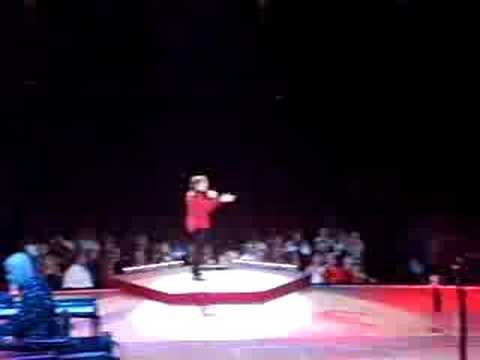