By now you’ve probably read about or seen a news report about 8-year-old guitar prodigy Tallan “T-Man” Latz who can play the blues and has been holding his own on stage with some of blue’s heavyweights.

Is it that the kid’s ability is so far advanced?

Let’s look at this way.

First off, most of us don’t think kids can play that good. And part of the wonder lies in the age-defying maturity element best shown in the film I’m Not There; a film so good that it’s worth citing twice in one week.

Right from the start the oddly and instantly engaging Woody Guthrie character draws you in.

The sheer spectacle created by the film’s director Todd Haynes conjured similar feelings as the young African-American boy (Marcus Carl Franklin) calls himself Woody Guthrie and rides in railroad boxcars playing compelling folk songs that are well beyond his and the years of his captivated adult audience who circle ‘round to watch in awe.

Had Latz called himself Buddy Guy or BB King I would have felt even more like those adults as I watched Latz display his rare blues talent.

Then I thought of the example explored in Robert Jourdain’s book Music, the Brain and Ecstasy.

In the chapter on performance, he paints a picture of a young musical savant called “Blind Tom” who can play the piano with such ease.

But there’s a catch.

Blind Tom plays with strange body contortions and lacks the ability to improvise and think in terms of musical hierarchy. And the key difference is that most musical savants like Blind Tom, lack the ability to express emotion through their music.

Jourdain also says the musical “savants” are usually born blind, and have a low IQ, and are only able to devote themselves to the practice of music and unable to interact socially and communicate as your average normal musician can beyond the stage.

But nonetheless, watching someone with that physical and psychological makeup perform some of the greatest and most complex piano pieces on stage is still remarkable to say the least.

It might be fascinating to watch a Blind Tom set but it sounds like it could be a dull emotional experience that wouldn’t send me to the back to buy his album at the merch table after the show.

Reading the story and watching the videos, I have no doubt that Latz is not of the “Blind Tom” type so I wondered why the feeling of a freak show spectacle is still there as I watched the video of Latz shredding his guitar on the Summerfest stage in Milwaukee, WI.

Then I considered the case presented by Daniel Levitin in his book This is Your Brain on Music. He mentions a study that shows it takes around 10,000 hours of practice to become a master, or expert at a specific skill, especially music:

“….generally we mean that an expert is someone who has achieved a high degree of accomplishment relative to other people. …the emerging picture from such studies is that ten thousand hours is equivalent to roughly three hours a day, or twenty hours a week, of practice over ten years.”

Levitin also cites Mozart who when you add up the hours to when he wrote his first complete piece meets all the “master” requirements for the ten thousand hour study.

Levitin mentions others who have seemingly surpassed and defied the study to achieve “world-class” skill at a young age. Latz has been playing for about three years so he seems to have blown that theory right off the stage, too.

But would Latz be considered world-class?

I can’t say for sure. But I’ve been watching and digging to see if the depth of his song writing and lyrics measures up, try to see if he’s just covering the great blues artists or learning and developing his own style through emulation, as he does emphatically mention the moment when he was five and watch a video of Joe Satriani playing.

It’s also a shame that other musicians have given the kid a hard time about playing in bars for violating age restrictions for clubs, claiming violation of child labor laws. What are they afraid of…being upstaged? Leave the kid alone and just let him play.

So did the Devil come up to Wisconsin?

It’s not too early to start asking if the kid has had a meeting with the devil like blues legend Robert Johnson did; the ominous tale says that Johnson met the devil at a southern crossroads and at that infamous meeting he sold his soul in order to play the blues like no one else.

And the more you think about the kid’s age and other child stars like Miley Cyrus and the Jonas Brothers the possibilities for true blues revolution in the coming years among the budding prepubescent and adolescents is encouraging.

I know if I had kids, I’d rather have them looking up to this kid than Hannah Montana or the flakey Jonas Brothers.

So is Latz a savant, an expert or just an 8-year-old kid who’s really good at playing the blues? Or a little bit of all three? 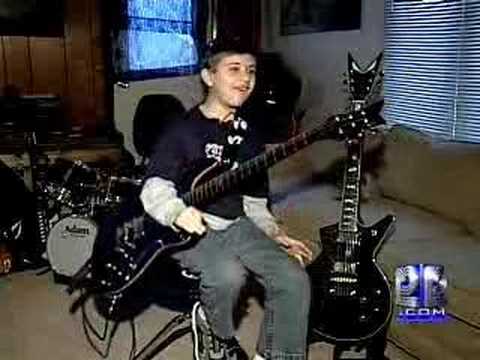