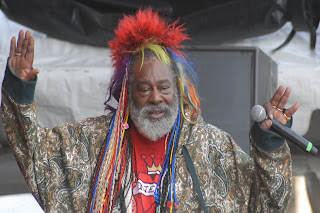 In the middle of May there was an ongoing story about Honda’s new ASIMO (Advanced Step in Innovative Mobility) robot conducting the Detroit Symphony Orchestra. I thought this was very interesting for a few reasons.

First, as the story explains, the robot was created to promote Honda innovation and music education. Hmmm..? Do we really need a robot leading an orchestra to demonstrate the importance of music education? I know I’ve reviewed some robotic performances before but this is a little too extreme. What’s next, a rock n roll robot that can receive text messages from fans in the crowd, telling it to play a certain song based on the fan’s moment to moment emotional requests? Actually, that would be pretty cool to see live, as thousands of texters send simultaneous messages to the robot who then burns up and explodes in true rock n roll fashion right on stage. Why don’t we have a concert just like that and send all the proceeds to music education. Let’s send that idea to Honda.

Secondly, what does this mean for the music press? What would it be like to cover a performance of robots? Would the reviews be any different? No, seriously. If the robots are playing songs that are already preprogrammed on a chip like a Show Biz character, with little ability to make adjustments” like ASIMO, what would it be like to write a review for that show? What would press releases look like trying to promote a band of robots?

And what about the fans? Would fans actually pay to see a robot conduct an orchestra or a play a rock show? I’m not talking about a Daft Punk show here, I’m talking about a real robot playing music where humans used to play.

But as you read the story you quickly learn that the ASIMO has its limits—which brings me to my final observation to tie all this robot craziness together.

Note of Clarity: I say the following not to dis one of the greatest and most influential musicians of all time but only to link together the past, present and future with a bit of humor.

While at Summer Camp 2008 over last weekend, I had the pleasure of seeing George Clinton and Parliament Funkadelic perform. As a hip hop fan, I truly appreciated the show as P-Funk is one of the most sampled and emulated groups. But as George Clinton came on stage and did his own conducting I saw way more similarities to ASIMO than I expected.