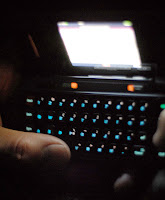 I’ll admit I was a tough convert. And I have to thank my sister for showing me the glow, of my cell phone at a live show, that is. Even though we had a long (somewhat helpful) argument about the difference between hip hop and rap on the way home, I have to give her full credit for introducing me to texting when she texted me during a sold out show at the Abbey Pub. I was covering the Peanut Butter Wolf show, my wife Colleen was taking pictures at the front of the stage and I had wondered into the balcony to get a better view of the crowd and the DJ.

I then realized I had lost track of time and had also gotten separated from my sister and my wife. Then I felt a buzzing in my right pants pocket. I reached in and pulled out my cell phone that I had set to vibrate.

I read the glowing text message from my sister asking where I was. Feeling a little strange I typed a short message telling her where I was in the balcony. I looked around to make sure no one saw me texting, as if I was committing some nasty sin. I sent the message and in a few minutes my sister was next to me and then we corralled Colleen in the same way. It was a first for both of us. My first time texting at show and her first hip hop show.

And ever since that night, I’ve had to rethink some of my previous views towards the controversial practice. I have written about the practice in a negative way when I described the crowd at a Gym Class Heroes’ show last year. And even though I’ve been converted to the occasional live show text, I still look at certain fans just as Pink Floyd’s Roger Waters does as described in a Dallas Times article about texting at live shows. I also agree with the other artists quoted who believe that texting in just another way of mixing technology and taking in a concert in a new era. Like other technology, cell phones and texting have advantages and disadvantages, and I don’t believe it’s all that bad now that my sister has shown me the glow, even though she still doesn’t fully understand the difference between hip hop and rap.

I’ve even started to do experiments with texting and video at live concerts and see how they can be used to show me the myriad sensory experiences of a live show. Stay tuned for those on future posts.

Do you text at live shows? Does it annoy you or do you accept the merging of the two?

Let’s experiment! Send me an email with some of your favorite texts you’ve received or sent during a show and we’ll see how concertgoers are really communicating during the show.