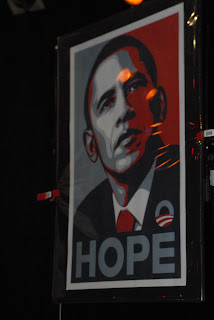 Senator Barack Obama has all but wrapped up the democratic nomination but how much of an impact did his presence on the live concert stage help in spreading the word?

Back in February, I mentioned how I saw flyers of Senator Obama on the face of the double drum kits of the opening band Office. Well, two months later in April, before headliner Saul Williams took the stage at Martyrs’, I once again was presented with another double dose of Obama support as an audience member, curiosity of funk-punk rockers Dragons of Zynth. But this time the expression of support was larger, more prominent and came in the form of two glossy two-foot framed images of a sky-gazing Obama with “HOPE” written along the bottom of the picture. Those posters flanked the stage and rumbled on their stands as Dragons of Zynth added more vigor and rock n roll muscle to a political campaign that seems to only get stronger every day.

A recent news story mentioned how Obama’s presence in popular music and strong support by several hip hop artists has earned him a large amount of attention in areas other candidates struggled to get support. And, yes, I’ve seen several other similar displays of Obama support while at other shows and but this Dragon’s of Zynth demonstration made me question how successful these displays of support will be in November, and if it is enough to empower the politically disengaged music fans when the time comes for them to cast their vote in November, whether they want Obama to win or not.

And I’m also wondering how strong the connection has been for fans between the political expressions and the music, or have fans just been blocking out the Obama posters and simply focusing on the live experience they paid for, regardless of their political stance. I know I heard a mix of cheers and grumbles when the posters when up, expressing the shared excitement, the triteness of the Obama bandwagon and the uneasiness of mixing entertainment and politics in the same experience.

There’s no doubt that Obama welcomes the support (solicited or not) and his campaign advisors have certainly thought about the impact of having his face visible at every level of popular music, with the goal of having a solid positive and progressive connection between the music experience and the campaign message of “hope and change.”

So what are your thoughts about seeing Obama or other political support while at a concert this year or in the past? Do political demonstrations or similar expressions at rock concerts annoy you or inspire you?

Join the experiment and drop me a comment or an email, letting me know what you think.