Earlier this year, I began exploring the power of the “Little Things” with Bon Iver because, as I mentioned, having played baseball since I was old enough to hold a bat and toss a ball, there ’s one thing that the baseball taught me about live music; it’s that noticing and appreciating the “little things,” or the game changers, makes all the difference.

And the same goes for live music.

When I review a show I try to capture the big picture in broad strokes. But it’s in the details where the show can shift on a dime.

So I look for those pivotal moments, too.

Because when you notice the hidden nuances about your surroundings during the show, you also begin to discover what separates an average show from a great show and why certain shows have stronger subtexts and more significance for you than others.

And the Little Things come into play even more when the artist has many “little things”  permanently written all over his body.

Little things that you usually can’t see from afar. Like an artist’s tattoos.

But even though you can’t see them, they still become part of what I like to call the concert’s Collective Subconscious.

And somehow the concert’s collective subconscious is created by a mystic process that happens as all of these “little things” come together during the show and have a huge impact on the artist’s performance, which then flows right to our hearts and minds during the concert.

Nas: “The Helper and Protector” of the Collective Subconscious

This photo I’m featuring on this “Little Things” post  is a close up that Colleen took during Rothbury of  rapper Nas.  We had also seen Nas a week earlier at Rock The Bells; and though both shows failed to impress or truly move me, I’ve had a chance to see it from another more microscopic perspective.

And Since those shows, I’ve been intrigued by this tattoo on his neck of his full first name: Nasir, which after my some research, I learned means ‘helper’ or ‘protector’ in Arabic.

And when I  looked into Nas’s love for tattoos and saw how important a role his tattoos play in his music and self-expression, I also wondered more about the meaning of his “Nasir” tattoo and the placement of it on his body, and when he got it, etc.

That said, every time I look at this Nas photo I think back to the Rothbury and Rock the Bells shows wondering about the connection between self-expression, subtle tattoos and Carl Jung’s Collective Subconscious.

Psychiatrist Carl Jung coined a phrase known as the Collective Subconscious which this wiki defines as “a part of the unconscious mind, shared by a society, humanity and all life forms.”

Now, this is amazing when you think about the CS in terms of the live concert experience because the live music experience is such an electrifying moment of self-expression that’s filled with intense emotional peaks that are simultaneously shared with hundreds, or even thousands, of perfect strangers who only have one thing in common: the person expressing themselves on stage.

So, again, I think it’s amazing that looking at this tattoo close up on a photo reminds me that, as concert fans, we’re participating in a massive experiment with perfect strangers and fellow fans involving the heart, mind and the collective subconscious. On a very deep level we’re all merging and melding together as one.

And this Nas tattoo reminds me that whether we’re aware of this merging or not, it still happens and, as fans, we can enjoy the concert experience on so many levels, together or individually, consciously or subconsciously.

The mystical beat goes on

During Rothbury and Rock the Bells,  Nas was using beats and rhymes to act as tangible by-products of the Collective Subconscious.  And all of it, from his tattoos to the emotional call-and-responses with the crowd, merged together in one big mystical self-expression subconscious stew during the concert.  We swim around in it voluntarily or involuntarily.

Will knowing this make my next Nas concert better?

But I know this much is true.

When we go to concerts, so much goes on below the surface deep within our minds, that it’s nearly impossible to be completely aware of it all during the concert.

But we can revisit the power of the Little Things if we want to.

That’s why I love this photo because it 1) helps me to relive the moment and 2) when I relive the moment I can soak up all the nuances of the Nas show that I missed and 3) when I do that I almost always return to the artist’s music with a fresh perspective that I didn’t have before.

I’d like to share with you one last thing that deepened my understanding of those Nas shows.

When I watched this YouTube video I learned even more about his other tattoos that were hiding underneath his t-shirt and influencing the flow of the collective subconscious during the concerts.

What have you noticed lately about the collective subconscious at your last concert?

Have you returned to past shows with a new perspective after seeing a photo or watching a video? 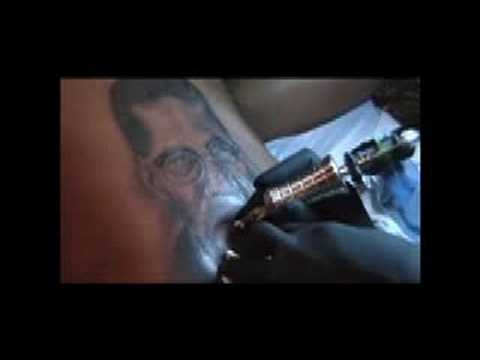