Why do we take pleasure in someone else’s pain?

Have you ever laughed,  or giggled, under your breath when you’ve seen someone trip and then kiss the pavement?

Ever since I can remember, when I see someone trip or fall, I usually laugh when it happens.  Not because I’m a heartless bastard. But because that’s my knee jerk response. I’m human. But is that how I really feel?  And is this a complete picture of my emotional response to that person’s pain?

The quick and simple answer is no.

But it ain’t that easy. Sorry. Our minds and emotions are even more complex than President Obama’s national health care plan.

I can quickly tell someone that I love a concert, or that it sucked.  But I hate that the connection between my mind and body, for some reason, doesn’t let me always express the softer emotions right away.  I always head for what’s easy and accepted.  I laugh and giggle while the other person feels embarrassed and ashamed.  But why?

And, more importantly, how does pain impact our live music experiences when we see artists like Steven Tyler, Drake, My Morning Jacket and No Age suffer in pain during a concert?

The reason I’m bringing this up is because those artists have all experienced pain in the last year during a concert.  It’s no surprise that this kind of stuff makes headlines. Like every other concert fan, I’ve watched the videos, read the stories and combed through the fan comments and responses. I’ve felt empathy and questionable amounts of pleasure.  And it’s my guilty pleasure that I want to explore with you.

Steven Tyler’s Spill Put Me Over the Edge

Now, I had been planning to do a post about pain that took my thoughts in a different direction. But when I heard that Steven Tyler had broken his shoulder during a Aerosmith show last week. I recalled what they smelled like, then I quickly gathered my notes and thoughts that have been brewing for awhile and wrote this post.

Though the thought of having a “Falling Down Fest” was funny, I knew I definitely didn’t want to skim the surface like Fuse TV and Billboard did with their round up. I wanted to go deeper. I wanted to think more about how seeing an artist experience pain impacts how we as fans respond to their  unfortunately painful performance.

Are we painfully inadequate?

I first wondered, why is it easier for us to laugh, or let out the long I-can’t-believe-what-just-happened-gasp?  Is it a culture emotional handicap?  I think comfort has something to do with it.  Because both, the laugh and the gasp, are more comfortable for us as we watch the other person fall off stage unexpectedly.  You can also factor in desensitization. We’ve all seen too many episodes of America’s Funniest Home Videos, Jack Ass and stupidly addictive YouTube videos that we’ve confused ourselves right out of having any genuine empathy.

I wonder sometimes if we’ve made ourselves painfully inadequate to deal with the pain of others, or worse, to process our own pain?

Sure it might be easier for us to laugh, or quickly gasp, and move on than tough it out and go through the harder emotions. And sure, laughing does comes naturally for most of us. But so does swearing according to Time. Heck, even Rueters tells me bullies apparently like to see others in pain, too.  But I’ve never considered myself a bully for taking pleasure in someone else’s pain–even though I confess to watching marathon episodes of Jack Ass with no shame.

But as I’ve gotten older, and began reviewing concerts,  I’ve wondered why I laugh first when, down deep, I’m really sad, shocked and concerned when I see an artist fall and hurt themselves on stage.  I hate seeing it. But why do I have such a hard time expressing it?

Can science help me?

Science can be helpful. Sometimes. I read these studies that told me we aren’t even sure if our brains can tell the difference between our own pain and the pain we see others experience.  And this New Scientist article says studies have been done on race being a factor in how we feel empathy towards others in pain.  Man!  Now were going to throw race into the mix! I didn’t even think that Drake’s race was impacting my empathy when I watched him fold up and collapse to the ground like an accordion. Could him being an African-American really influence how much empathy or compassion I have for him?

I could just sit back and click the next headline or numbly  watch the next related YouTube video.  But I didn’ t.  I forced myself not to.

I created a short and emotionally painful experiment. I took a brief  look at the scenarios of each performance and checked them against the emotional levels, or reaction I felt and I saw the other fans have.

No I didn’t find the secret to human emotion in this experiment.  But my brief exploration did help me better understand our response to pain at a live concert.

I asked myself a bunch of questions to gauge the scene. But two questions have me the best answers  1)What was the scene like right before the fall?  2) Did the fall change the emotional trajectory of the performance? For the most part, all the falls came at a moment in the show when the music was peaking to a dramatic swell.

Then wham! That swell popped and emotions plummeted like a free-falling elevator.  Some artists had band, or tour,  mates come out and try to either reclaim the emotional intensity or explain the physical status of the fallen artist.  Some used awkward humor  (rapper Lil’ Wayne), while others ( guitarist Joe Perry) just relayed hard facts telling fans the show was over.

This  Billboard report shows a bit of fan empathy:

“Fans were disappointed the concert was cut short but hoped Tyler wasn’t seriously hurt.”  Lance Yellow Robe, who said he was 8 eight feet from the stage when Tyler fell off, told the Rapid City Journal “you could kind of see it coming because he was dancing all over the stage.   “I hope he’s OK,” Yellow Robe said. “I could care less about the concert being canceled.”

Like I’ve done before, I used Robert Plutchik’s  Wheel of Emotion as a guide to check the emotional levels and better understand these painful events.  I’ve been able to understand why they’re important. And I’ve gained more insight into our emotional response to live music.  Mostly importantly, my experiment confirm that all the standard emotion you’d expect to find at a concert were there:  surprise, excitement,  joy, anticipation, etc. And when the painful event happened, the positive emotions were instantly swept away and replaced with negative emotions:  fear, sadness, anxiety, uncertainty, etc.

Okay, so I explored the scenarios and check the emotional levels.  Now what?

Here’s what I took away from my experiment:

When something tragic like this happens I believe that artists can learn a lot about how to put on an emotionally charged show full of  purposeful and well-orchestrated peaks and valleys.   And when we step back and look at painful live concerts, as fans,  we get valuable insight into what goes on in our own hearts and minds during a show.

What struck me the most about these painful concert situations is the sudden shift of emotion. I wasn’t at these particular concerts, but judging from past experiences,  before the fall occurs there is a dramatic swell that fans were expecting to take them even higher. But, then suddenly, the artist falls and the emotional apex of the performance is aborted. And the emotional trajectory takes a dramatic shift in to unpleasant realm of the negative emotions.

When were forced to face negative emotions in a non-concert situation, our normal response is to be confused, remain in shock or what do what some call fight or flight.

But it’s not so easy at a concert. The phenomenon of concert pain is one of the most fascinating aspects about live concerts.

I was amazed to think about the illogical side of the pain transfer between artist and fan, too. Meaning that seeing the physical pain of others can make us experience pain and turmoil psychologically and not physically? In other words, someone else’s physical pain is our psychological struggle.

That said,  I’ve found that the amount of pain a fan can experience during a show depends on the amount of pleasure you’re experiencing at the moment of the sudden shift. Our moods and emotions change all the time and when my concert environment unexpectedly changes (another fan is screaming in my ear, the sound mix sucks, or a tall fan has just blocked your once unobstructed view) I usually have some type of irritation.

But, in contrast to the irritating feelings, when I recall my last ten “favorite” concerts, I find that only when the shifts and changes in music are well orchestrated do I experience pleasure and enjoy the contrasts.  I also found that those changes in the mood of the music–the dramatic pushes and pulls of melody and rhythm–are what make the show stick with me and make the two hours seem like two minutes.

It’s also really no surprise that my brain likes quick, pleasurable changes during a concert.

And thanks to all these artists falling, I’ve been able to better understand how important it is to be aware of a concert’s underlying dramatic emotional shift. For this is where the pleasure gold is buried and discovered.

After thirty years, I’m sure Aerosmith knows exactly how to get, and keep, a crowd emotionally engaged–without falling off the stage.

But were Drake, No Age and My Morning Jacket fans emotionally ready for the plunge?

As expected fans showed loads of sympathy and concern and wished My Morning Jacket lead singer Jim James quick recovery from the internal injuries suffered  after his fall last October.

And because it’s just a few days past, I’m sure that No Age fans are still working through a degree of survivors guilt or post-tramatic stress and sadness as they watched No Age lead singer writhe in pain after he dislocated his shoulder during the silly dance contest.

And astonishingly, as scheduled, No Age still played Lollapalooza 2009 the next day.

But can fans ever prepare themselves for live concert pain?  Maybe. Maybe not.  Either way, what I do know is this.

Even though we might not like being in a sad, afraid or lonely emotional state, I am realizing that–for some strange reason–I do find pleasure as I travel from the positive to negative emotions.

That said, if the music is just right and the artist has mastered the art of  performing with the right mixture of guiding, surprising or matching fan emotions then,yes, the show will probably be “awesome.”

I’ve been in several concert situations where an artist  has gone down and the crowd gives off a collective gasp. And I imagine it must have been equally jarring for fans at the Aerosmith, Drake,  My Morning Jacket and No Age concerts.

But it’s still weird to think I would find pleasure in being pulled and pushed back and forth between positive and negative emotions in a matter of seconds. But if I pay attention, the facts and truth is there.  You can’t have pleasure without pain.

Hears are quick updates on each fallen artist and videos of each painful concert:

Judging by the MTV update, Drake is learning on the fly and hopefully his ACL holds up.

No Age did play their concert but had to play sitting down.

And Aerosmith has postponed their tour.

How do you feel when an artist goes down? 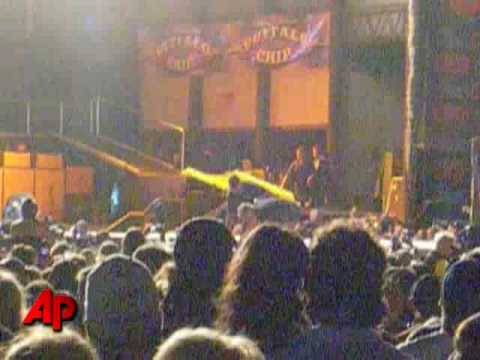 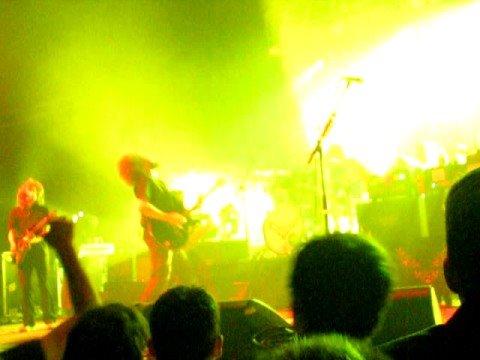